The CSPS Internship comprises a series of virtual talks and lectures featuring prominent thinkers, scholars and writers, to speak on pressing themes related to the field of pluralism. The eighth session hosted Professor Cemil Aydin, who gave a talk to our interns about the “The Intellectual History of Ummah and Pan-Islamism”. The session included an introductory lecture following an interactive question and answer session between Prof. Aydin and the audience.

Professor Cemil Aydin is a Professor of history at the University of North Carolina and a prominent author of books like “The Idea of the Muslim World: A Global Intellectual History” (Harvard University Press, March 2017) and “The Politics of Anti-Westernism in Asia” (Columbia University Press, 2007). His research broadly focuses on modern Middle Western history as well as Modern Asian history.

His focus has been on phenomena that shape the racial and civilizational identities of groups such as Muslims, Africans and Ottomans. His research brings non-Western intellectual and historical perspectives to understanding the historical events that require sub-altern narratives. Prof. Aydin completed his BA at the Bogazici University, Istanbul before completing his MA at Istanbul University and his PhD from Harvard University, in 2002.

The session was moderated by Dr. Amir Ali, Assistant professor at the Jawaharlal Nehru University, New Delhi. Prof. Aydin’s lecture drew from research for his last book “The Idea of the Muslim World: A Global Intellectual History”. He cited the main goal of his lecture, to highlight the main elements of Muslim intellectualism and the Ummah (community). He began his lecture by pointing out a very grave historical distortion about the same:

“For various reasons, Muslims in Asia were not capable of creating sustainable, tolerant and pural societies.”

He went on to tell the virtual audience of examples from the life and actions of the Khilafat Movement, the Persian Empire and the Mughal dynasty that are the opposite, to what they are represented. As opposed to the highly publicised barbarism of the aforementioned, South and West Asia under these political movements and Empires set several standards of inclusivity and pluralism. Prof. Aydin shared with the audience how John Locke, in an essay on equality, recounted observations of travellers from South Asia, who noted how tolerant and inclusive the land actually was. However Prof. Aydin issued a reminder- “the tolerance they had might be different from our contemporary notions of citizenship.”

Distorted understanding of Pan-islamism and Ummah

As per Professor Cemil, the contemporary notion of Pan-Islamism has been boiled down to some simplified tenets throughout the 18th century: a) Creation of an Islamic state b) Forming global Islamic unity and c) the narrative of ‘clash of civilizations’. He highlighted the problem with this simplification was primarily that a lot of Muslims themselves have bought into these pervasive and popular narratives. He juxtaposed them with examples of sub-altern literature, citing the work of Malek Bennabi, an Algerian philosopher and author. Bennabi was very critical of the Timurid empire, and believed that it was their attack on the Ottomans resulting in the Battle of Ankara (1402), that may have otherwise prevented or delay European expansionism into the region.

Muslim rulers did not believe in the ‘clash of civilizations’ narrative. They saw their contemporaries and empires with other religions alike. Nadir Shah fought, defeated and looted the lands of the Mughals, which weakened them in the wake of colonial inroads into South Asia.

Pan-Islamism in the 19th century

The 19th century saw a wider call for global unity among Muslims, a genuine Ummah. Prof. Aydin explains this development through Seema Alavi’s work in “Cosmopolitanism in the Age of Empires”. Technological revolution, increased interconnectedness and technologies such as telegrams broadened the scope of spreading messages. Ironically, the British Empire built the infrastructure for increased Muslim connectivity, as per Professor Cemil.

He then explained the emergence of narratives that racialized Muslims and Hindus in South Asia, one that intended to separate Muslims from Hindus and Christians as inferior. “…racialization was a rejection for their claim to equality.” As a response to this, Muslim intellectuals such as Syed Ahmed Khan, Mohammed Iqbal, the popular Aligarh Generation and the Young Turks retold interpretations of Islamic texts and brought about an enlightenment period for Islam. Prof. Aydin describes the period between 1870-1920 as the ‘Golden Age’ of Pan-Islamism, where globally shared narratives of the ‘Ummah’ surfaced. This period is also characterized by robust links between the Ottoman Empire and South Asian Muslims.

Professor Cemil Aydin took the opportunity to contextualise the Khilafat Movement (1919-1924)l as per historical accounts. The Khilafat, which is seen today as a reactionary Muslim fundamentalist movement, was in fact pragmatic, pluralist, anti-racist and anti-imperialist at its core. While the movement did romanticise the idea of an Ummah, it established the Ottomans as a symbol of resistance to imperialist rule. The movement is empirically a revival of Muslim cosmopolitanism. Proof of Islamic fundamentalism in its ideology is absent.

As per Prof. Aydin, the Ottomans had a lot to gain from this period of Muslim enlightenment. Asian empires were pleasantly surprised when the Ottomans abolished slavery and opened modern schools and universities. Most of them followed suit, a popular example of which is Osmania University (1918), Hyderabad,  which was inspired by Istanbul University (1453), Istanbul. Pan-Islamism for the Ottomans was a call for peace and the idea of the ‘Ummah’ was a glue to connect empires. Prof. Aydin spoke highly of Sultan Abdul Hamid (1842-1918), who’s life and tribulations have been depicted in the popular television show, “Payitaht: Abdulhamid” (The Capital: Abdulhamid), stating he never asked Muslims in other countries and empires to revolt or embark on fundamentalist ventures.

This peaceful revivalism allowed for the Ottomans to forge an alliance with the British Empire. One that was built on the crest of the British being the largest Empire in the world and the Ottomans being the seat of the Caliph. This alliance saw the British supporting the Ottomans in countering Russian expansionism, and even Ottoman support for the British during the 1857 revolt of India. Essentially the enlightenment created fertile grounds for the growth and spread of intra-Muslim and intra-Asian conversations against racism.

“In global intellectual history, the assumption is that all the good ideas came from Europe and the role of all non-Europeans is to copy, accept and emulate.”

Professor Cemil took excerpts from the second half of his book, where he talks about the end of the Golden Age, which as per him begins with the decision of the Ottomans to side with the Germans in World War I (1914-1918), and their call for a ‘Jihad’. Which he also defined contrary to its contemporary notion of fighting for Islamic supremacy. He defined Jihad as an effort of self-preservation, or for the Ottomans during WWI, as protection of national sovereignty.

According to Prof. Aydin, the Golden Age of Islamic enlightenment ended with the rise of nationalism in West Asia. Nationalism liberated Muslims from colonial rule but it divided the Ummah by the creation of international borders. The rise of nationalism was characterized by socialist, anti-Western movements that possessed ideological rigidity. These movements considered themselves pious and imposed the Sharia on their peoples, adopting a fundamentalist nature.

The biggest casualty of the end of the Golden Age of the period of colonization and orientalism, for Prof. Aydin, are Muslims themselves. He laments the partitions that created a shift and loss of life and while moving across borders for those in India, Pakistan, Turkey, Greece and Armenia.

“We need a new intellectual history, a new global history. That is careful about the context and the nuance, and cannot be deceived by textualism.”

Dr. Amir Ali offered his concluding remarks for the erudite and knowledgeable session conducted by Professor Cemil Aydin. He shared the importance of understanding how global history opens up limitations of categorisation in South Asia. He thanked Prof. Aydin for shedding light on the shadows that the Muslim enlightenment cast onto Europe. Dr. Ali noted how an understanding of Islam earlier was dependent on the reading of translations, which could vary in their interpretations of texts. He mentions George Sail’s translation, as one that carefully brings accurate context to understanding Islam. In reference to the contemporary era, Dr. Ali noted that Western countries like Britain do not acknowledge that Muslims were ever seen as a race, ergo denying their hand in promoting Islamophobia. “Islamophobia is refracted through the prism of the nation-state”, he said, and that the problem arises with how Muslims look at themselves within the nation-state.

The well attended lecture opened up to a question and answer session, which covered a healthy dearth of intellectual research pertaining to Pan-Islamism. One comment from the audience pertained to the popular narrative that Kemal Ataturk’s victories on the battlefield were the sole cause for a favourable result for Turkey in the Treaty of Lausanne (1923), despite the involvement of Indian Muslim leaders like Mohammed Ali Jauhar (1878-1931), something that they were delighted to hear Prof. Cemil point out.

Another member of the audience inquired how one can contextualise Pan-Islamism in an environment where factual inquiry into historical facts is entirely disincentivized and Islamophobia is spread through misinformation. Prof. Aydin responded saying that the narratives of orientalism have to be multi-layered and not simplified. Simplification of South Asia as a “Hindu-land” by the British is what enabled them to create a narrative of the British saving Hindu empires from barbaric Muslims, which in turn sowed the seeds for Islamophobia. Thus it is up to us to write a more authentic account of this history.

Another question from a CSPS intern focused on how we can delineate Pan-Islamism from extremism in the context of radical Islamism in Jammu and Kashmir. To this Prof. Aydin pointed out that narratives must not simply serve the international community, but focus on their failure of courting or responding to regional movements. Another intern highlighted how the idea of the Ummah is only invoked today as a form of ensuring solidarity, or a relief from the tribulations the Islamic community has faced in the last few years. In such a context, how can we introduce ordinary Muslims to the intellectual understanding of the Ummah? Prof. Aydin explained this phenomena as the following: late Pan-Islamism argues that “…only Muslims can be friends of Muslims.” This argument is more explanatory for most Muslims than the juxtaposing truth that a lot of Islamic nation-states during the cold war had the support of the USSR and even China. He said this perception can be changed by insisting on pushing the real picture of the Ummah along with the message of solidarity.

Another inquiry was based on the practice of Muslim intellectuals globally having to constantly defend themselves through academia and literature. Prof. Aydin compared this to the experience of most marginalised communities in the world, citing that minorities internalise this framework of having to prove their loyalties to peace. One question “can the rise of Islam be explained as a reactionary force to emergence of European modernity?” was explained by Prof. Aydin, who highlighted that Islamic history needs a more systematic and non-Eurocentric approach.

Another question asked if the discrimination endured by Muslim women could be labelled as purely political, as opposed to being gendered. Prof. Aydin agreed, citing how women have been made both victims of Islam, as per narratives of the West and the enemies from Islam, citing policies that discriminate against the right of Muslim women to wear Hijab. He also said that it is thus the responsibility of intellectuals to criticize orientalism and Islam’s mistreatment of women.

The session ended with a rich exchange between the centre’s director, Professor Omair Anas, Dr. Amir Ali and Professor Cemil Aydin and was concluded by Dr. Ali. 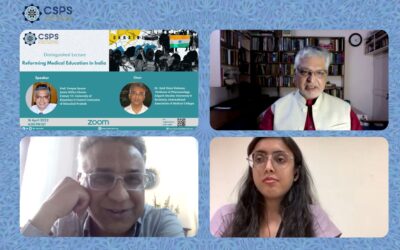 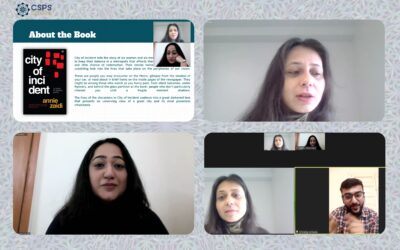 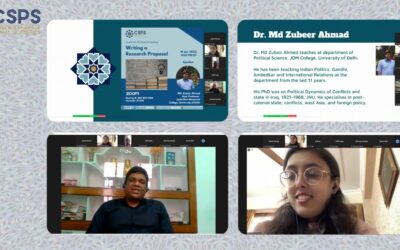