Annie Zaidi, the author of the novel “City of Incident” and the winner of the Tata Literature Live Award 2020, interacted with the CSPS interns discussing the key concepts of her novel. The novel “City of Incident” echoes the actual voices of the metropolis. It has 12 stories escorting the idea of every day, unveiling the neglected narratives of the city. Wafa Hamid, Assistant Professor at Lady Sri Ram College, University of Delhi, chaired the session.

The chair initiated the discussion by highlighting the claustrophobic and inhabitable nature of the city despite the aspirations and opportunities it offers. She asked if the novel is a love letter dedicated to the city as the novel revolves around it, showcasing its honest picture both in the public and domestic spaces. Zaidi admitted it is a love letter addressed to Mumbai, where she had spent 16 years. She throws light on the shortage of spaces in cities, which forces its people to transform their spaces according to their needs. She further said that true claustrophobia comes from bad relationships, reiterating her idea that “nothing can make a space uglier than the lack of physical and psychological freedom. The unhappiness of being dominated and suppressed in a space can make a person deeply unhappy.” This psychological state is a kind of claustrophobia, which she mainly observed in homemakers who feel that all their roads are converging into a single closed path.

Zaidi wondered if anyone understands the tormented relationship women have with their homes, within the four walls, with going somewhere, being allowed to go somewhere, constantly having to report back the things they do. She questioned the inability of people to understand that a woman needs a life outside her family regardless of how loving the family is. Hamid shifted her thoughts toward cities and homes’ changing experiences and behaviours during the pandemic. She dived into the themes and characters of the novel and found out that the uncanniness of home is one of the most recurring images in it. Women often don’t have their own spaces in “their homes.” They are tied by the ropes of expectations built by the dominant groups. She iterated how images of children are glued to the women in a society where people expect women to prioritise their children more than anything. Often, women have to justify their existence, even to their own families. For men, their usefulness is mainly measured by their ability to provide and support their families financially. For women, the sense of usefulness comes from their bodies, which is considered the original home of all humanity and kindness. Their failure in giving birth dislocates them as a whole. They doubt their existence in such cases. People fail to understand their psychological state.

Zaidi unveiled the picture of Mumbai that fails to escape the materialist reality of other people. She shared her experiences of travelling in the local trains and women’s compartments. Women’s bodies behave in different ways in mixed surroundings and women-only surroundings. In women-only surroundings, women often tend to have more confidence in their bodies, heedless of the level of femininity in them. She revealed the presence of first and second-class bodies in the cities. This separation of classes has urged people to re-invent their bodies to fit them into the higher category. She believed that hope is protection, and to be mistreated means there is no form of protection at all. Big cities are also spaces that witness many hopeless haunted women and children in the street.

The chair showed her keen interest to know more about the concepts of death, belonging, and displacement across the body of the novel. The narrative of death written in the novel has a tone that makes it desirable. She insisted Zaidi to speak about the overlapping nature of life and death in her narrative. Zaidi said, “life, in a way, is precious because we know death is coming. What we call life is time. Life is the gift of time.” She also remarked that death is desirable when it occurs unnaturally. People are curious about things that are out of the ordinary. The unordinary elements in the city are perceived as the ‘incidents’ to which people give their attention, expressing their curiosity even in their busy lives.

As the discussion progressed, Zaidi highlighted the role of journalism in moulding the writer in her. Although it helped to understand the depths of the stories or experiences, it didn’t have any room for diversity and intersectionality of experiences. She recalled how while interviewing a person accused of attempting to kill his sister, she had to suspend her judgmental thoughts to understand his story from different angles.

On being asked about the process of putting a genre into a language that can both violate and articulate a problem, Zaidi emphasised the need to exercise writing in different genres and styles as a writer. For her, the genres are mostly driven by images that connect with a set of other images either instinctively or consciously. “City of Incident” encapsulates a lot of stories, and Zaidi has captured them and framed them beautifully in the novel. The session turned out to be a great intellectual discussion upholding the transparent view of city life.

The report is prepared by Aiswarya T S,  Research Intern at CSPS

← Prev: CSPS Academic Writing Workshop on Writing a Research Proposal Next: A Theory of Doddering Dominoes → 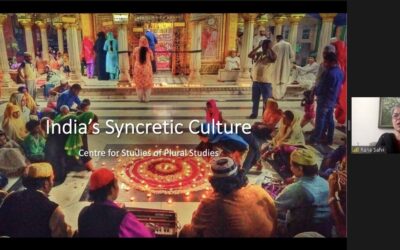