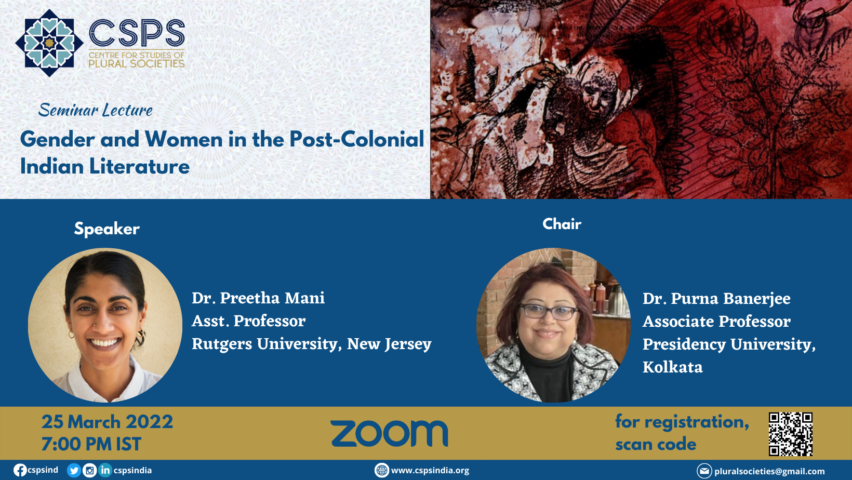 The discussion will be conducted on 25 March 2022 at 7:00 PM IST on zoom. Register About Speaker Dr Preetha Mani is an

Dr Preetha Mani is an Assistant Professor of South Asian Literatures at Rutgers University. Her research focuses on how representations of the Indian woman are used to shape ideas of regional and national identity, and experiences of belonging, in the aftermath of Indian Independence. She is currently completing a book manuscript, which chronicles the emergence of the short story as a preeminent genre in twentieth-century Hindi and Tamil literature. The book proposes a view of Indian literature as a field of comparative literature that is comprised of mutually imbricated local, regional, national, and global processes of literary canonization and shows the short story to be a major genre of postcolonial literature and central to the formation of the new woman. She has an enduring interest in the relationship between gender and genre and the popular and the literary, which informs her ongoing work on the comparative study of Indian and world literatures, translation studies, and women’s writing in South Asia.

Purna Banerjee is an associate professor at the Presidency University, Kolkata. Prior to this, she taught at University of Rochester (USA), Texas Christian University (USA), and Millikin University.

She has specialised in Victorian and Modernist Novels, Periodicals, and Travel Literatures and in the Postcolonial Anglophone traditions. Her research continues to be on constructions of the female subject in situation of cultural marginality and epistemic violence. She also has deep interest in oral and prose narratives and poems produced by displaced women. She teaches British literature, Victorian Novels, Modernist literature, Literature by women, Postcolonial Anglophone literature.