Seminar Lecture: The Intellectual history of Ummah and Pan-Islamism by Prof. Cemil Aydin 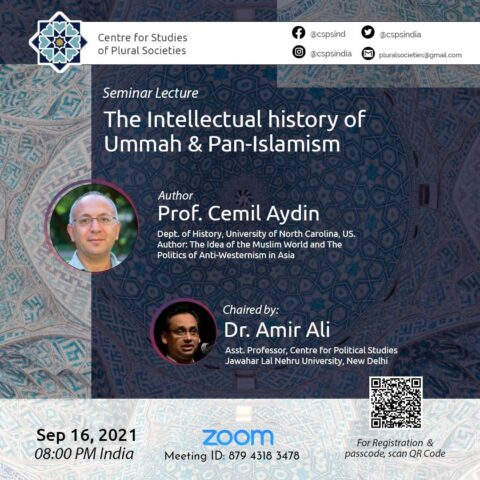 The discussion will be conducted on 16th September 2021 at 8:00 PM IST on zoom. Register About Speaker Cemil Aydin is a Professor at at the

The discussion will be conducted on 16th September 2021 at 8:00 PM IST on zoom. Register

Cemil Aydin is a Professor at at the University of North Carolina-Chapel Hill’s Department of History. He studied at Boğaziçi University, İstanbul University, and the University of Tokyo before receiving his Ph.D. degree at Harvard University in 2002. He was an Academy Scholar at the Harvard Academy for International and Area Studies, and a post-doctoral fellow at Princeton University’s Department of Near Eastern Studies. Cemil Aydin’s interests focus on both Modern Middle Eastern History and Modern Asian history, with an emphasis on the international and intellectual histories of the Ottoman and Japanese Empires. He is particularly interested in historical processes that shape transnational racial and civilizational identities, such as Muslim, Asian, African. His research and publications offer new ways to understand the historical roots of the contemporary world order by describing the process of imperial era conflicts and decolonization, especially from the perspective of non-Western actors of the Muslim world and East Asia. Other research and teaching interests deal with questions of internationalism and orientalism, and modern world history.

Dr Amir Ali is an Assistant Professor at the Centre for Political Studies, School of Social Sciences, Jawaharlal Nehru University, New Delhi. He teaches courses in political theory and has interests in multiculturalism, group rights and political Islam. Previously, he has taught at the Jamia Millia Islamia University, New Delhi, and was a Visiting Fellow at St Antony’s College, University of Oxford, UK. He has written a book on Brexit and Liberal Democracy: Populism, Sovereignty, and the Nation-State (Routledge), his other recent publication includes: South Asian Islam and British Multiculturalism (Routledge).