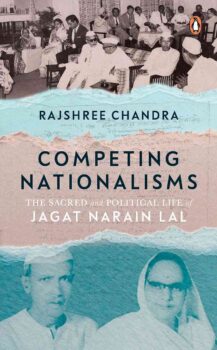 The book discussion will be conducted on 18th December 2021 at 6:00 PM IST on zoom. Register About Book Competing Nationalisms is more than a political biography of Jagat Narain Lal-now forgotten

The book discussion will be conducted on 18th December 2021 at 6:00 PM IST on zoom. Register

Competing Nationalisms is more than a political biography of Jagat Narain Lal-now forgotten by history, but once an influential member of the freedom movement in Bihar. As a member of the Congress and of the Hindu Mahasabha; as a Hindu nationalist who wanted to combine religion with civic virtues; as a Gandhian and an ‘ascetic nationalist’ seeking freedom in a political world, Jagat Narain Lal’s life becomes a mirror for the times in which a mix of religiosity, spirituality and ritual could not be separated from either the social or the political field.

The book travels with Jagat Narain Lal on his journey through four pathways-Ascetic, Hindu Nationalist, Anti-Colonial and Civic nationalisms. His life and times give us a glimpse into these intersecting, contesting and mutating idioms of nationalism. There are bigger leaders, taller nationalists, more valiant fighters of freedom, but none who perhaps so tortuously embodied the many possibilities and contradictions of Indian nationalism. In his anxieties, vulnerability, negotiations and truth-telling, we glimpse Indian nationalism’s own fraught relationship with questions of identity, faith and nationhood.

In leafing through her grandfather’s life, page by yellowed page, Chandra presents not just his political biography but, in a sense, a personal biography of Indian nationalism as well. In Jagat Narain Lal’s small story lies a bigger history of competing nationalisms, as well as a tale that speaks to the present. For purchase, click here

Rajshree Chandra is an academic, a teacher and an author. Most of her writing and research is primarily at the intersection of political philosophy, law and politics. She is the author of The Cunning of Rights (2016) and Knowledge as Property (2010) and has written several research articles and political commentaries. Chandra has received the UKERI (UK-India Research Initiative) award for research collaboration, the ICSSR post-doctoral award, the Australia India Institute’s ELF fellowship and the IWM (Institute of Human Sciences, Vienna) visiting fellowship. This book-a political biography of her grandfather, rendered through the prism of nationalist history-has been generously supported by the New India Foundation Fellowship.

Rajshree Chandra is a professor of political science at Janki Devi Memorial College, University of Delhi, and is a senior visiting fellow at the Centre for Policy Research.

Sucheta Mahajan is Professor at the Centre for Historical Studies, Jawaharlal Nehru University, New Delhi. She has been Gillespie Visiting Professor at the College of Wooster, Ohio, US,  a Fellow of the Indian Institute of Advanced Study, Fellow of the Rockefeller Foundation’s Bellagio Center and a Visiting Professor at the Maison des Sciences de l’ homme, Paris. Her significant books include Independence and Partition: The Erosion of Colonial Power in India (2000); India’s Struggle for Independence (1988; with Bipan Chandra et al); RSS, School Texts and the Murder of Mahatma Gandhi- The Hindu Communal Project (2008; with Aditya and Mridula Mukherjee) and Education and Social Change: MVF and Child Labour (2008). She has also edited many books such as Rites of Passage, A Civil Servant Remembers H.M. Patel ( 2005); Composite Culture in a Multi-Cultural Society (co-edited with Bipan Chandra), and most recently, Towards Freedom 1947: Documents on India’s Freedom Struggle (2013). Her fields of interest span the short and long history of the twentieth century, its politics, political economy and social change.