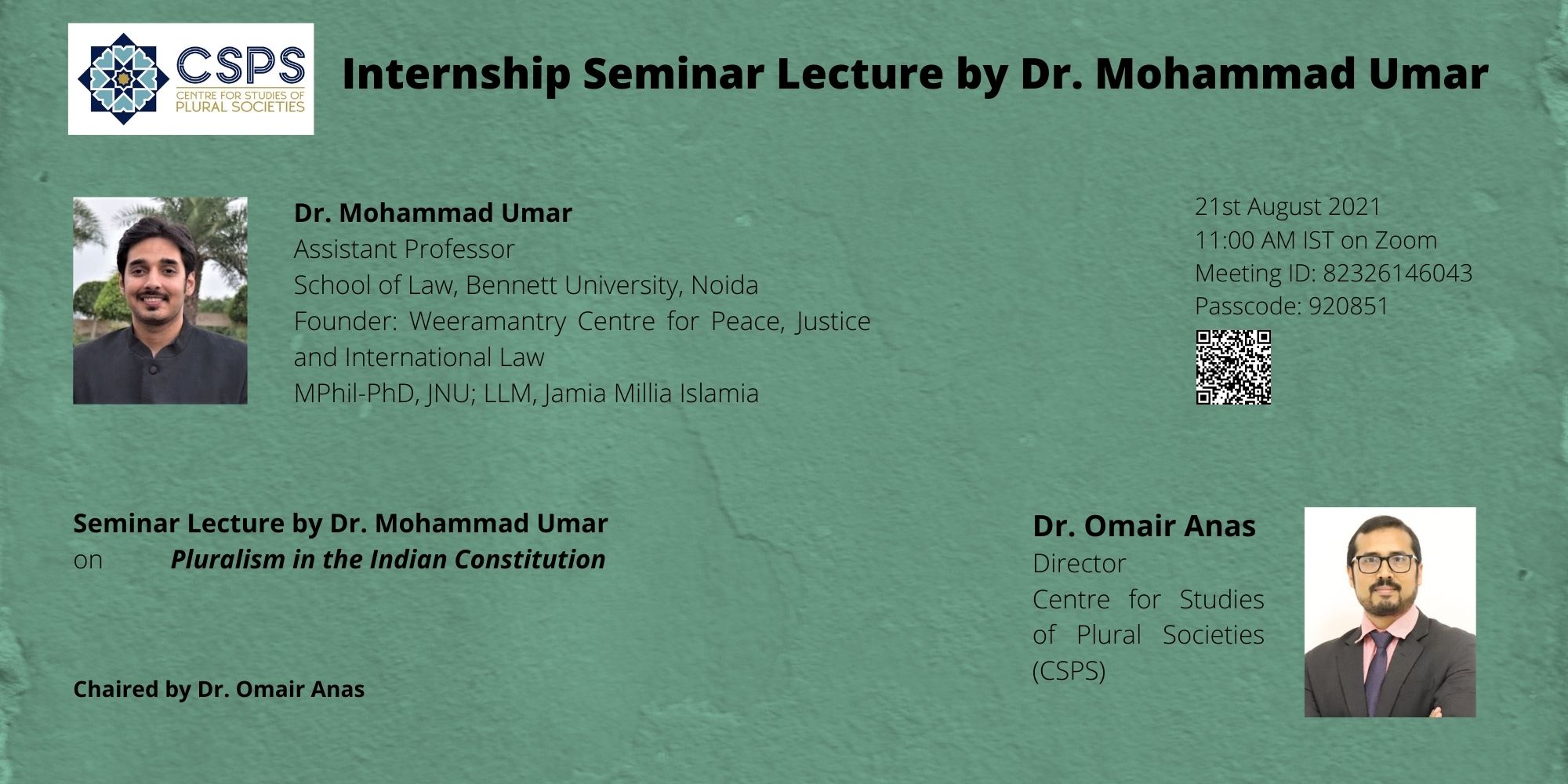 The CSPS Internship comprises a series of virtual talks and lectures featuring prominent thinkers, scholars and writers, to speak on pressing themes related to the field of pluralism. The second session hosted Dr. Mohammad Umar on Pluralism in the Indian Constitution. The session included an introductory lecture following an interactive question and answer session between Dr. Umar and interns.

Dr Muhammad Umar is an expert in legal studies. He is currently as an Assistant Professor at the School of Law, Bennett University, Noida. He is also the founder of Weeramantry Centre for Peace, Justice and International Law.

Dr Umar initiated his talk by introducing the constitution by defining it as a document that defines and specifies the normative behaviour and patterns of social, economic, and political relationships. He asserted that the empirical world is far from that normative pattern. Thus, it is the need of the hour, especially for the scholars, to look at the constitution in every single matter of our daily life. He focused on the need to specifically look at the constitution from the perspective of pluralism and how it accommodates several diversities, which is the prime feature of our constitution. Firstly, he explained the constitution’s preamble and said that it does focus on equality, justice, liberty, and fraternity. These are core principles that are based upon the ideology of pluralism wherein the constitution assures a respectable life to each section of society. He added that based on the debate on the word “secularism” and its addition in the constitution through the 42nd amendment act 1976, he could not invoke the thought that India was not secular from the day of independence. Although, the exact words didn’t mention principles, which reflect the spirit of secularism in the Indian constitution from day one of its enforcement. The term ‘Fraternity’ in the constitution had that soul in it. He further explained the articles highlighting religious pluralism- Article 25, 26,27, and 28 as fundamental rights.

The excellent discussion was followed by a questions and answers session. The interns raised some significant doubts, uncertainties, and comments. An intern raised the concern of overlapping the boundaries of religion and secularism and questioned the idea of binary between religion and secularism, which looks overlapping in the Indian context. He also raised the question of why the concept of pluralism is still can’t be seen although our constitution contemplates it. Dr Umar responded that the realization of the normative pattern as documented in the constitution is the duty of the State, and there is political dishonesty responsible for it. Another intern asked, “it is noticed that the kind of inclusiveness our constitution guarantees is highly undermined by state excesses and its military. Such treatment results from unjust use of military powers by the State to exploit minorities, for example, the use of AFSPA and Enforcement of emergency. In response to this, Dr Umar said that constitution does not allow that at all. We can overcome these issues just by intelligently considering the judicial reviews of the Supreme court. He added, “in Thangjam Manorama case, supreme court told the government to pay a compensation of Rs. 10 lakhs to Manorama’s family who was raped and killed by the military”. It ensures that constitutional provisions are still open to reinforce its pluralistic nature. Another intern highlighted the ambiguity of the word secularism.

The program came to an end with the vote of thanks by Dr Saad Ahmad.